In the northern part is the village of Bamba, where, since ever, that is to say since the Dogon arrived in this magic land in Mali long ago, a sacred fishing ritual is practiced, known as “Antogo”. A small yet very powerful lake rests just beneath Bamba.

Saturday, market day, and only that precise Saturday. Antogo is celebrated only once a year, in any other day fishing is strictly prohibited in the lake. It’s 15:00 p.m., May the 2 (for us westerners), an horrible heat brings temperatures up to 50 degrees. The sun, also partying, burns in the sky, giving as present rare shades every now and then to few lucky ones. In coincidence with the sixth month of the dry season – which burns the Sahel in the months between April and May – the council of wise man of Bamba gets together in order to fix the exact date of the ritual; for the first three market days of the month large wooden sticks are placed in the middle of the lake, signalling that the ritual is getting closer; this latter is celebrated the sixth Saturday of market in Bamba. The 3 sticks function as a signal for the whole region, warning that the date is coming soon.

Back in time the whole area of Bamba was covered with green forests and bush, and the lake, whose water were immediately considered sacred e populated by good willing spirits, offered tons of fishes, which contributed to satisfy local food necessities. With time, climate change and parallel processes, including the massive desertification of the region, the area has transformed itself from a green zone into a arid, dry, eroded, poorly fertile, rocky area, characterized today by huge problems in terms of water access and availability. This small yet eternal lake, apparently capable of resisting climate evolutions, represents a precious resource still today, above all from an identity and cultural point of view.

The ritual seems in contradiction with one of the distinguishing aspects of the Dogon culture, that is, the antipathy towards water as such, which they prefer avoid when they can, confining and structuring their living around rocks, hills and semi-deserted areas, sure far away from the feared river Niger.

On the day of Antogo hundreds of Dogon coming from all parts of the country come to Bamba’s lake. Around the lake we notice 3 bigger groups of people, formed by the most respected and ancient families of various Dogon villages. The largest group is the one of Bamba, which includes people from 13 smaller villages around. Each of these groups, in a collective mystical silence, pronounce ritualistic formulas, together with the names of the most important families; finally, the word comes to the wise of Bamba, who, when done speaking, mark the beginning of the ritual itself.

A silent black frame get drawn all around the lake, made of little kids, man and old men, carrying a tool hand made in order to catch the fishes. Women cannot participate to the ritual, getting close to the lake is strictly prohibited; in fact, in line with other aspects of the complex Dogon cosmogony, which confines woman away from the ritualistic-magical life, women are considered impure by definition, because of the menstrual cycle.

All of a sudden hundreds of Dogon jump wildly into the lake, in order to capture as many fishes as possible and in all possible manners. Fishes are then placed in a leather bag that they all carry. The dance goes on happily and chaotically. The sacred water makes it impossible that any one get injured with fishes’ tenterhooks, no spines, no cuts, never, not in the hands or in the feet. Water mixed with mud draws faces and bodies, the intensity of the moment is immense, overwhelming.

Just about 30 minutes later a gunshot marks the end of the ritual . All fishes captured will be put together and given to the oldest man of Bamba, who will ensure proper distribution among all villages.

Antogo – embedded in mystery and magic – symbolises peace and cohesion among Dogon villages, absence of conflicts and the sharing of the gifts coming from a common good. 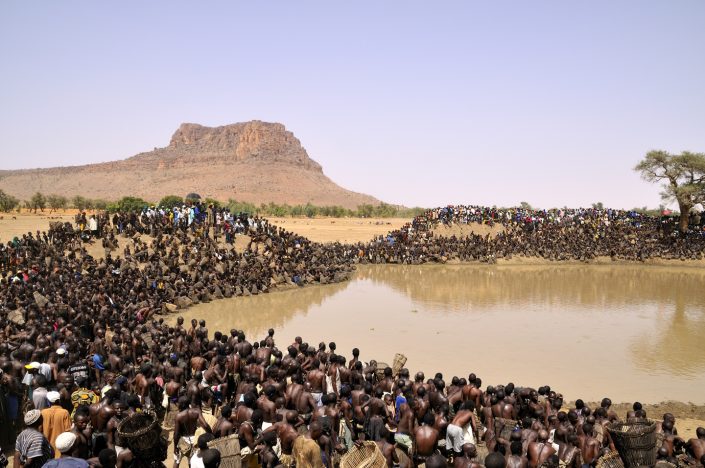 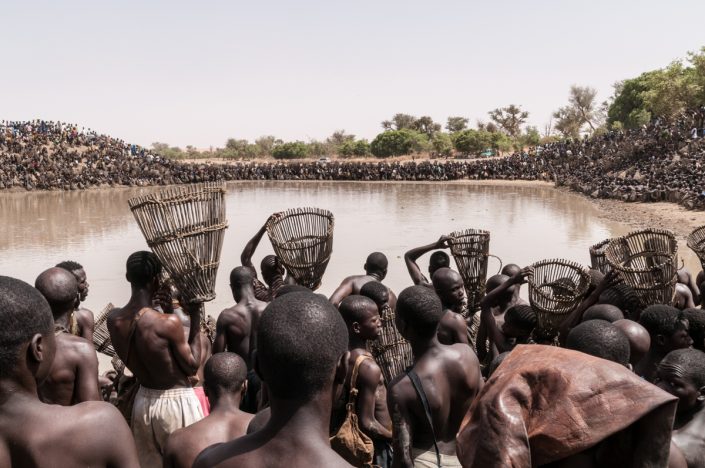 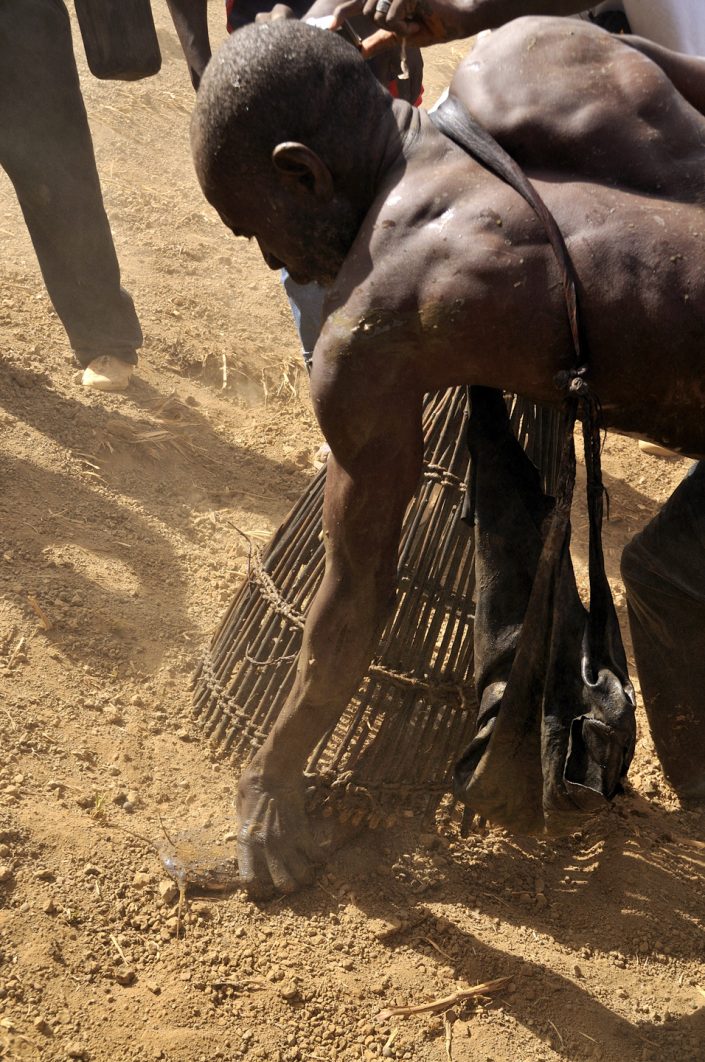 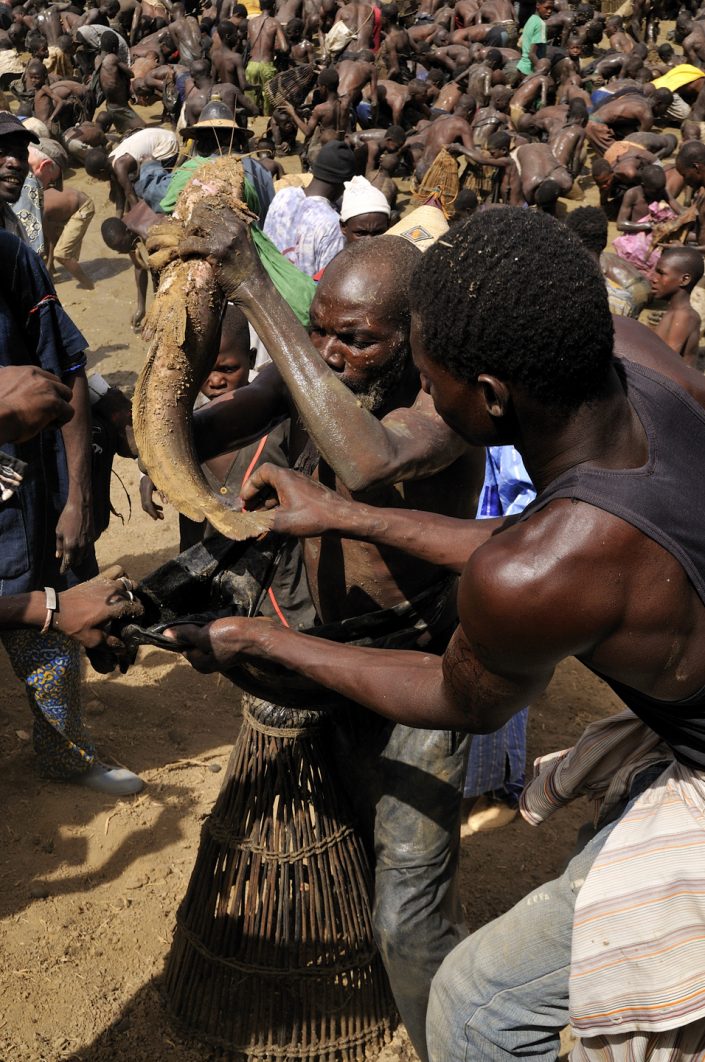 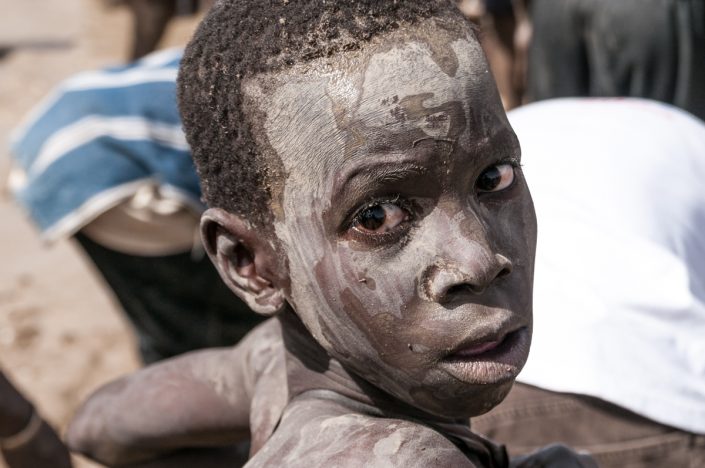 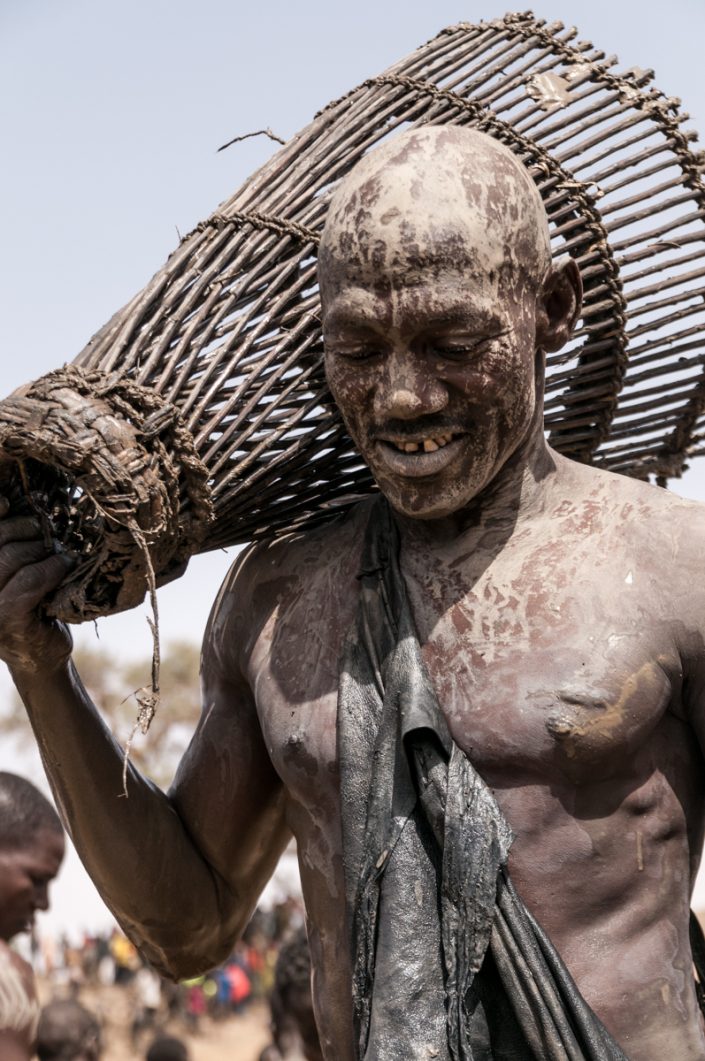 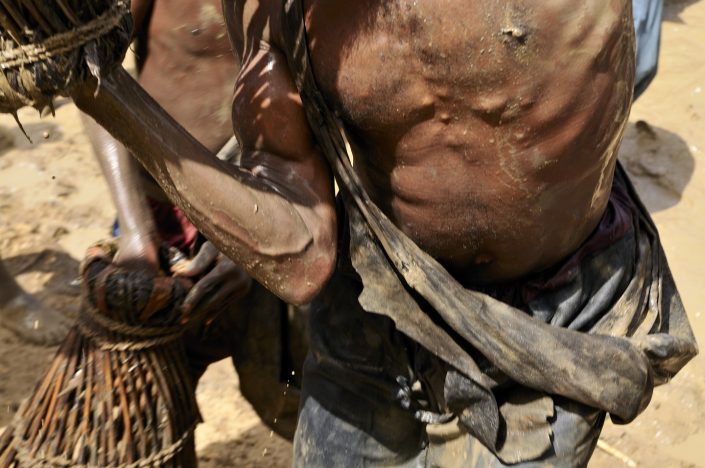 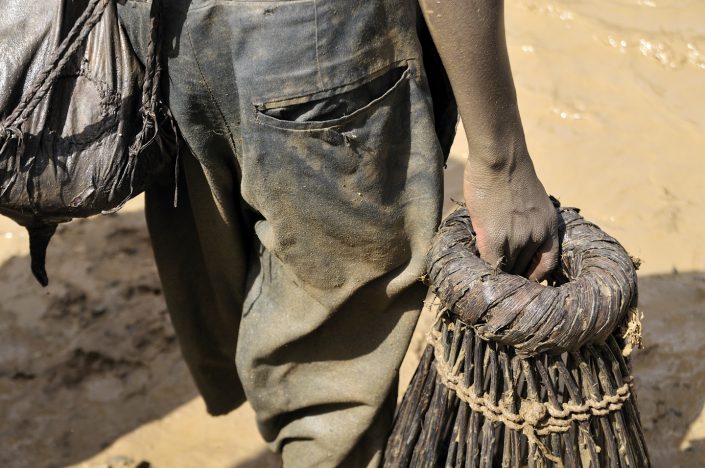 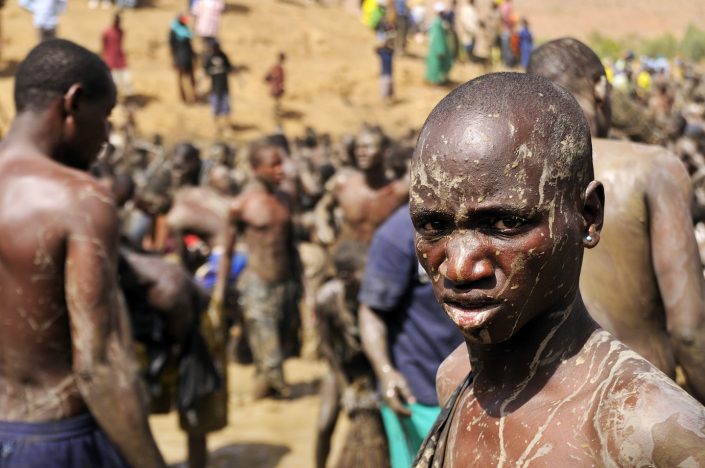 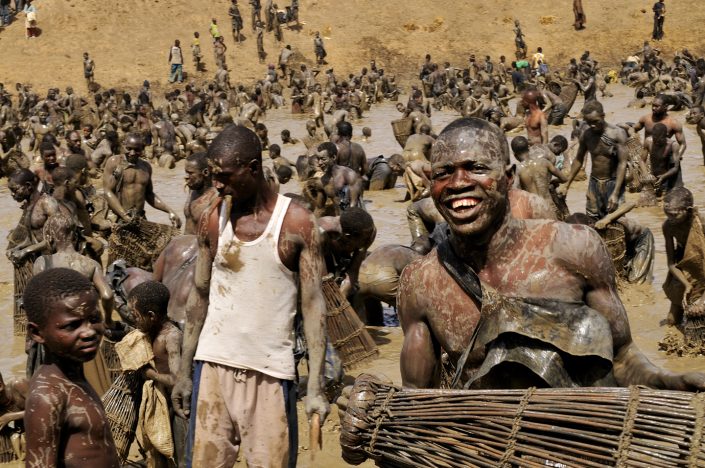 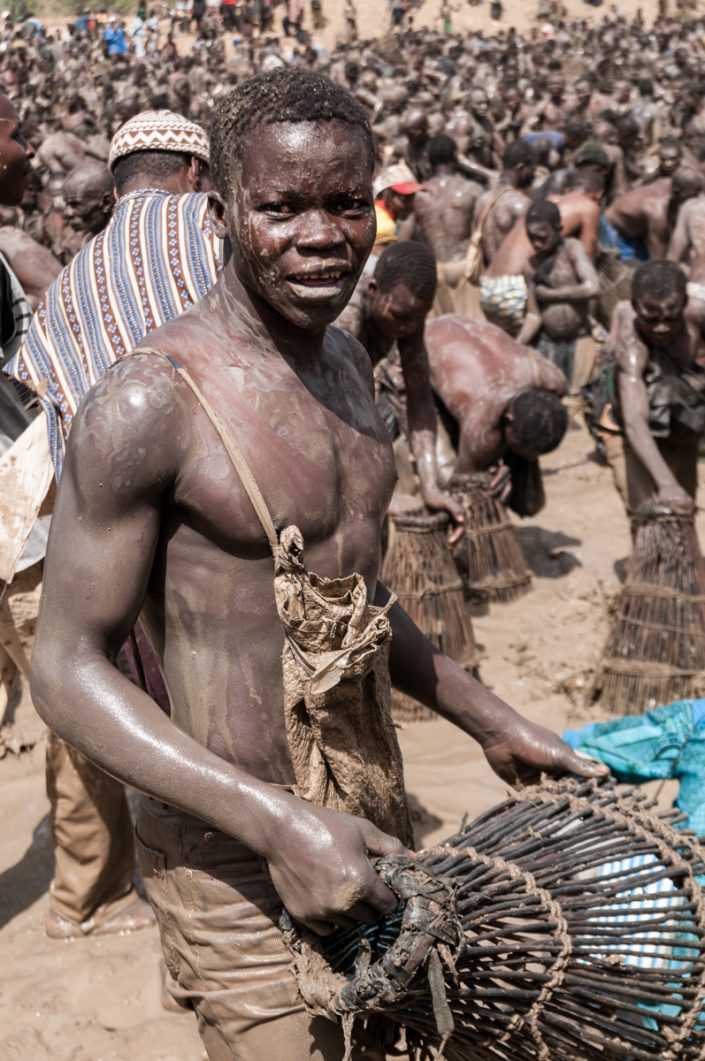 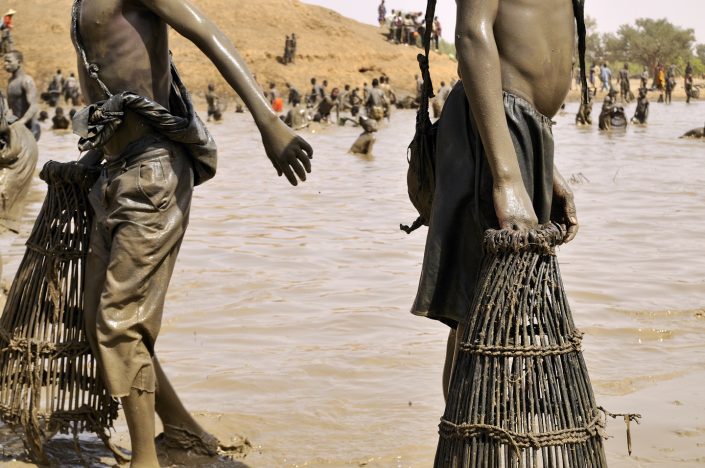 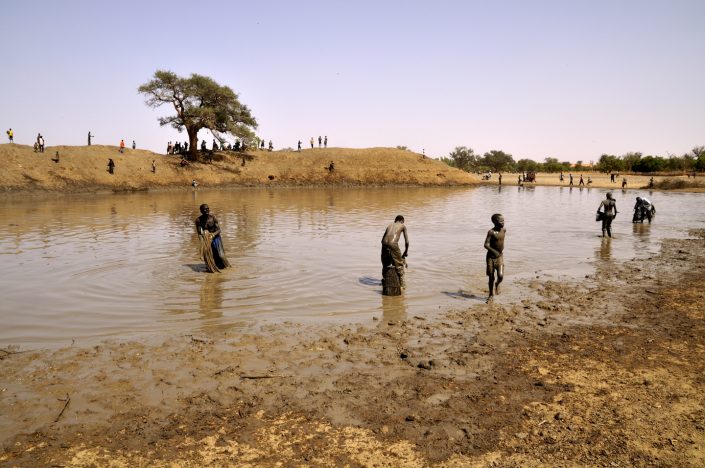